omi Bartole, ethnologist and co-curator of the exhibition “GREEN SKY, BLUE GRASS. Colour Coding Worlds”, has been a guest at the Weltkulturen Museum on multiple occasions in connection with the exhibition.

In 2019, ethnologist Tomi Bartole travelled to the village of Avim, which is in East Sepik province in Papua New Guinea. Having already spent time there in 2013/2014 conducting ethnological field research, he now wanted to consolidate his studies of the region’s politics and religion. Exploring art was an additional new focus: Bartole returned to Europe with eighteen acrylic paintings on paper, which he had commissioned eleven local painters to create.

A number of these works are now on show in the exhibition “GREEN SKY, BLUE GRASS: Colour Coding Worlds” – along with the sago palm leaf paintings from the Weltkulturen Museum collection that ethnologist Eike Haberland had already acquired in Avim back in 1961. These paintings on palm sheaths, which were used to decorate the men’s house, are an impressive testimony to an artistic tradition that lies beyond a European history of art. 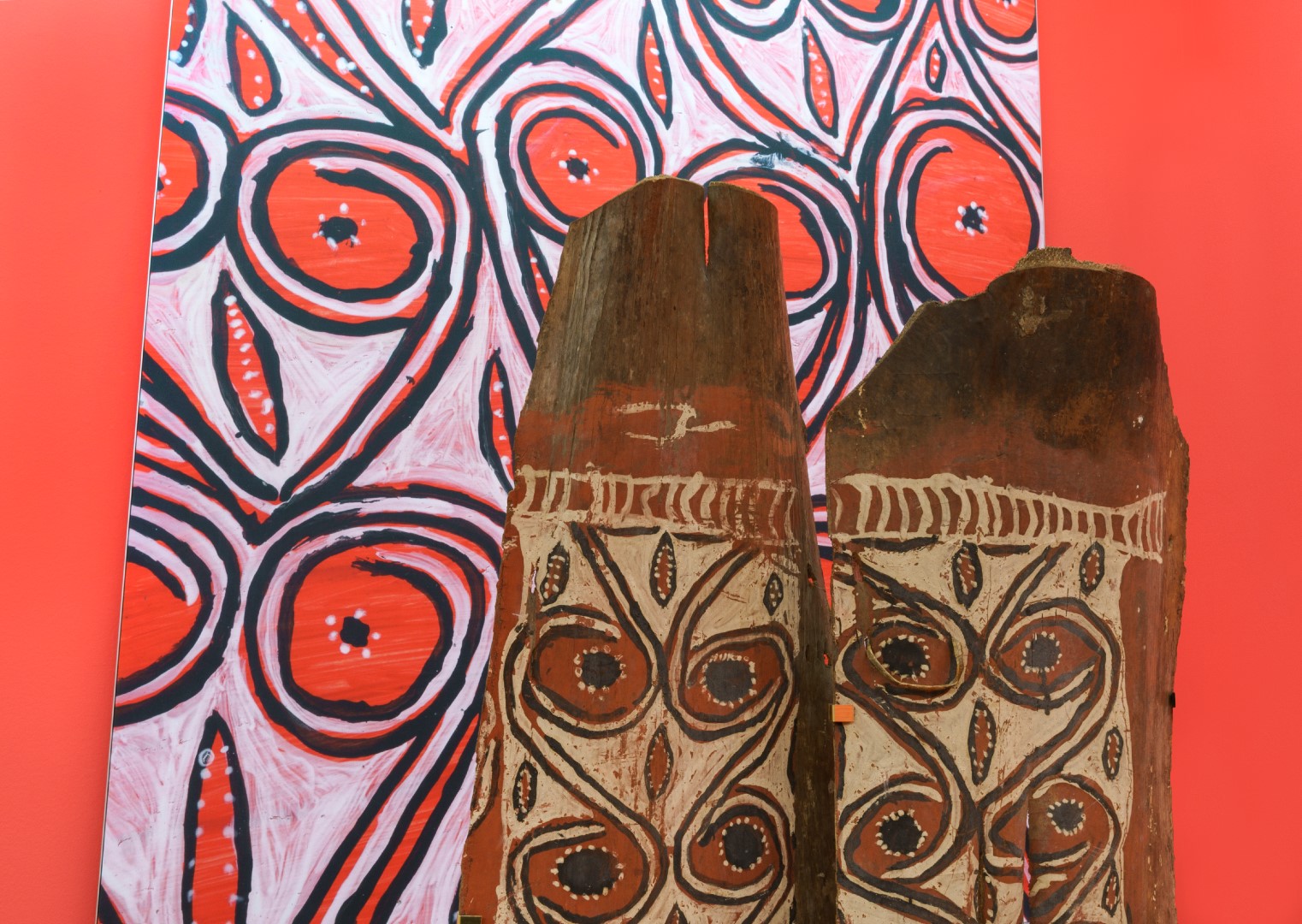 After an initial meeting with Bartole in December 2019, the idea emerged of presenting the Avim paintings as part of the new exhibition, which at that point was in the very early stages of planning and would later go on to become “GREEN SKY, BLUE GRASS”. With Bartole as co-curator, the meanings of the paintings as well as the underlying history of their relationships would be jointly researched and developed as a theme for the exhibition.

The eighteen acrylic paintings that the Weltkulturen Museum purchased from Bartole in 2019 were acquired for the Oceania department in association with the 2020 exhibition project. They were accompanied by the collector’s comprehensive documentation and complement the 1961 collection of visual works created by the Avim.

The historical and contemporary paintings alike depict mythical motifs and tell the history of the Avim, who at the same time regard the paintings as spirits. The Avim use the paintings and their powerful colours as a way of handing their sacred knowledge down to the next generation. The works are evidence that despite years of missionary work and cultural change, the aesthetic concepts and mythical motifs of the pre-Christian era have been preserved and are stunningly visible in these paintings. 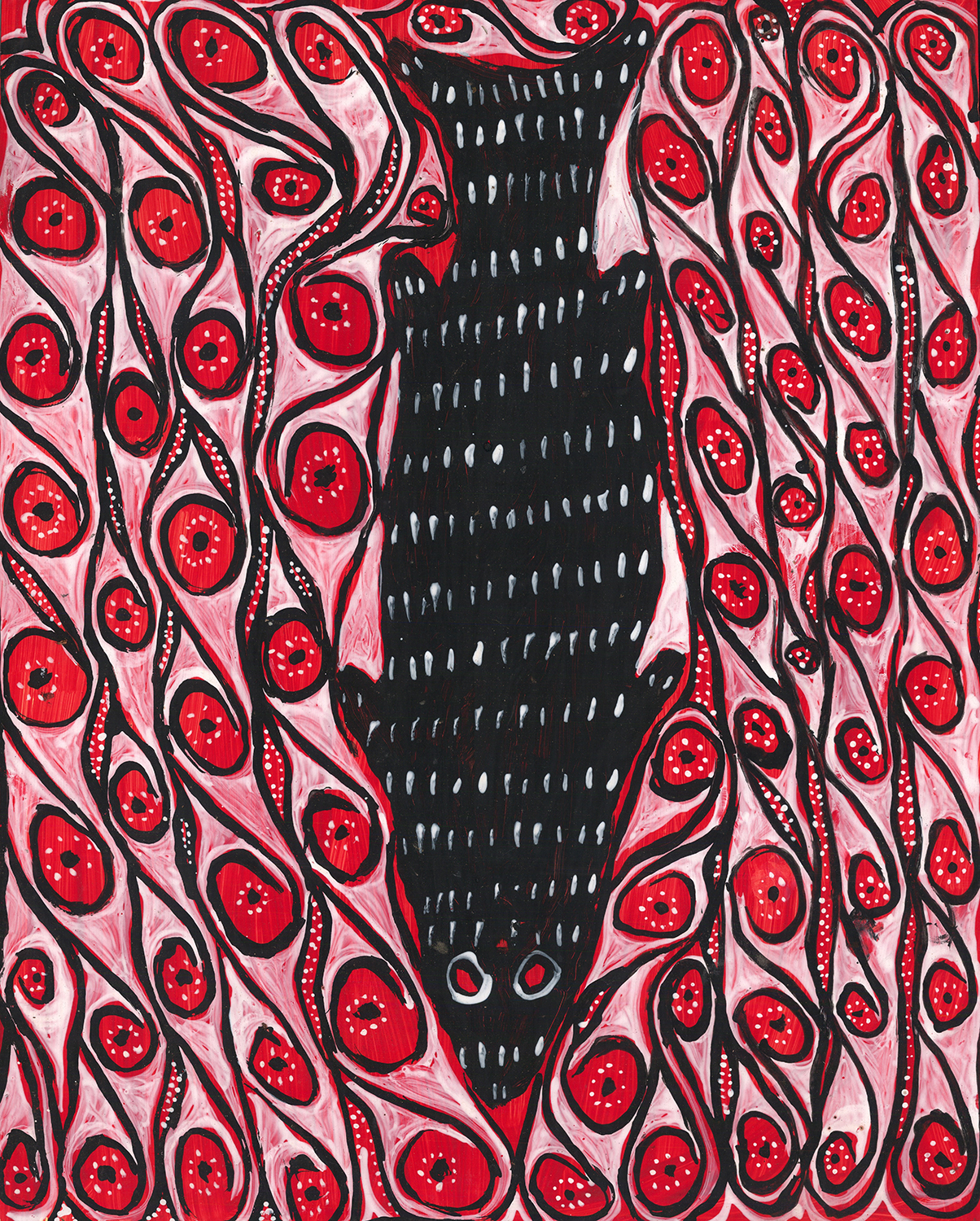 Yet there is something else that links the two collections: photos of the historical paintings on palm sheaths had already made their way from Frankfurt to Avim in 2011, where they served as inspiration for the communal working process that produced the eighteen new paintings.

Pandemic travel restrictions meant that Bartole was sadly not able to see the exhibition being set up as had been originally planned, because he could not enter Germany from the UK in March 2021. In fact, he was only able to see the exhibition – and the areas that he had co-curated showing the Avim visual works — in person at the Weltkulturen Museum six months later.

Moreover, studies of the Avim paintings and their documentation continued. Conducted jointly with Oceania curator Matthias Claudius Hofmann, the research had commenced in 2020 during the preparations for the exhibition. 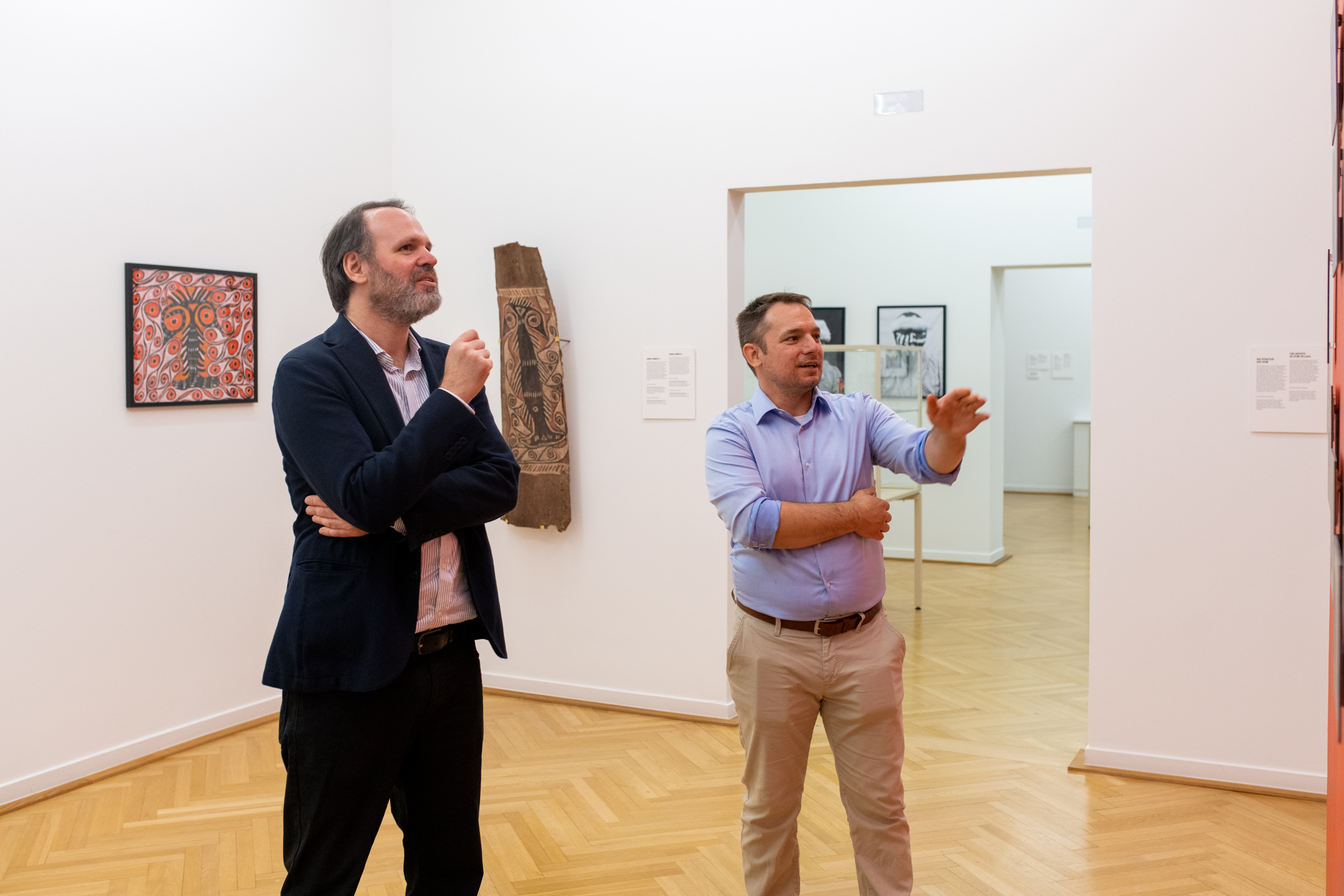 Bartole rounded off his visit in September 2021 by holding a conversation with his fellow curator in the exhibition “GREEN SKY, BLUE GRASS”. The two curators talked about how the paintings were created during Bartole’s field research, their cooperation, and how the subject evolved during planning for the exhibition. They also spoke about the history of the relationship between the Avim and the Weltkulturen Museum, which stretches back to 1961 and has now been revived with this project thanks to Tomi Bartole.

Dr. Tomi Bartole is an ethnologist who conducted field research among the Avim in Papua New Guinea in 2013/2014 and again in 2019. His research interests focus on rituals and issues concerning religious and political ethnology. 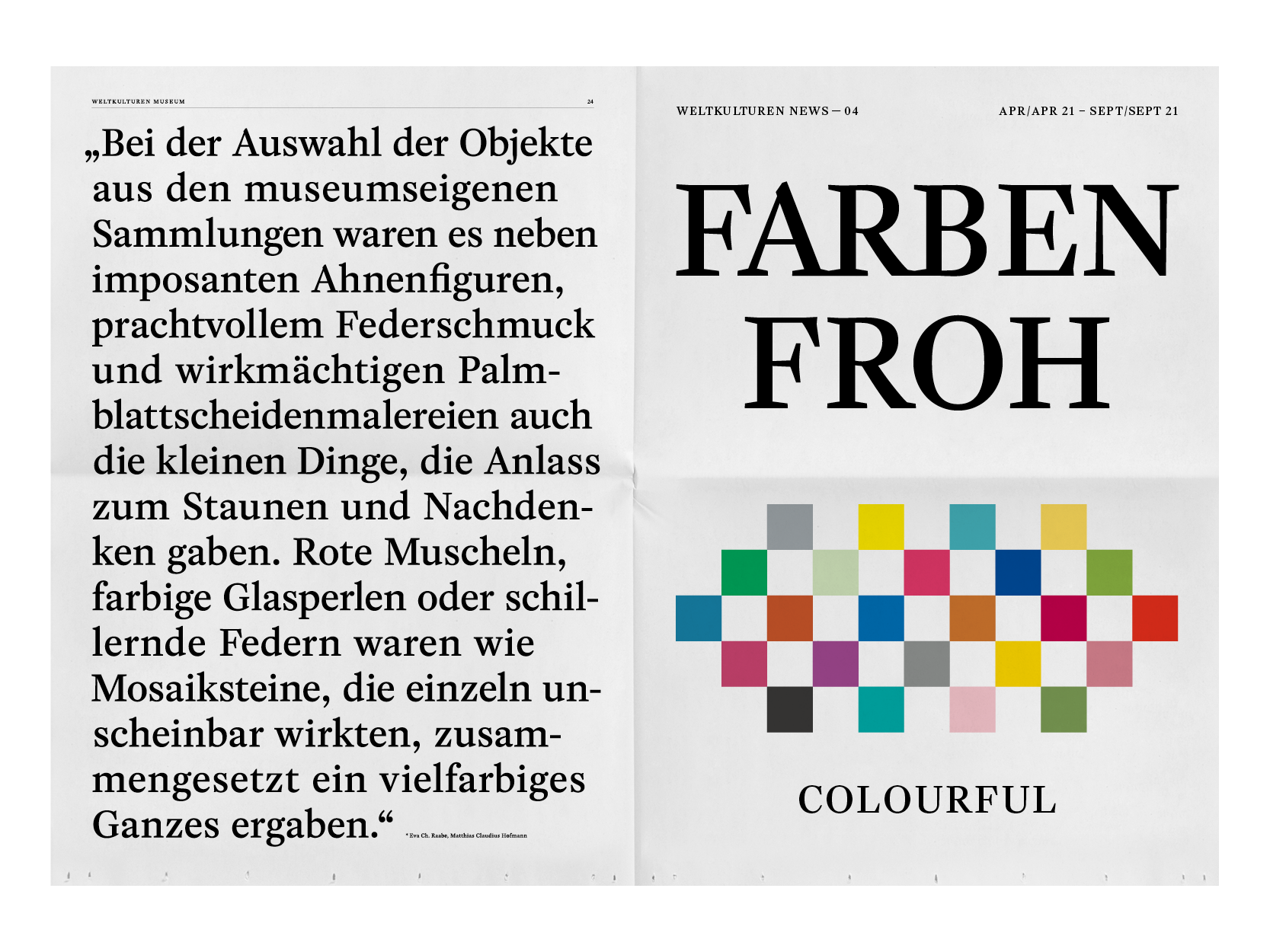 You can read more about the painting of the Avim in our blog: 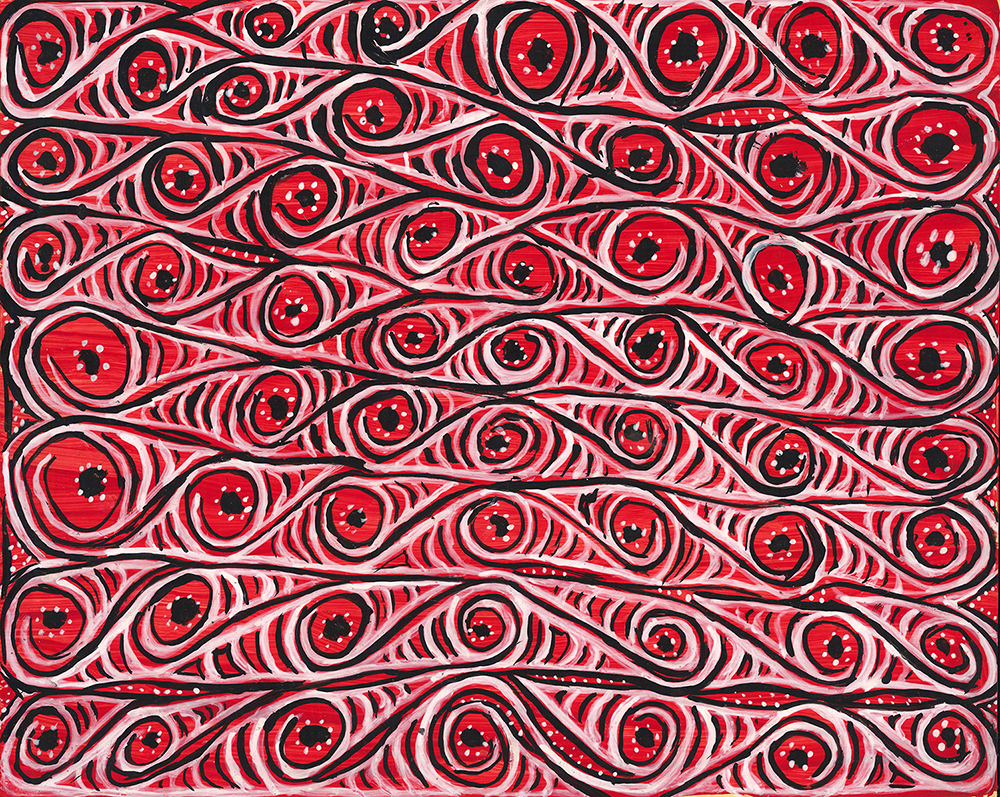 Read more about the exhibition: 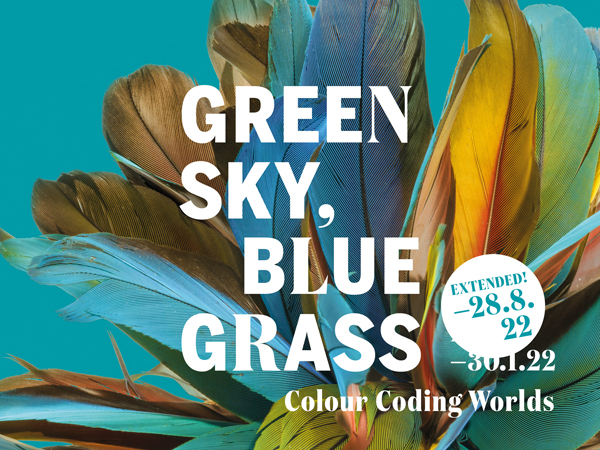