THE RETURN OF THE RESCUE SHIPS

Chris Grodotzki is a permanent member of the Sea-Watch media team. In his text for the new edition of the Weltkulturen News he writes about how civil sea rescue in the Mediterranean Sea has changed from humanitarian intervention to resistance movement.

“Piracy in the early eighteenth century was, at bottom, a struggle for life against socially organized death.”[1] It is unlikely that this definition of piracy, from Marcus Rediker’s “Villains of all Nations”, was going through the mind of the then Italian minister of the interior Matteo Salvini when, in June 2019, he proclaimed that the rescue of 52 people by the crew of Sea-Watch 3 was “yet another act of piracy by an outlawed organization”. And yet a similar battle has been raging on the Mediterranean Sea for the last five years: the European states have created a zone along their shared external border where all the values, citizens’ and human rights proclaimed by the EU have been suspended. A state of exception which degrades the sea to a weapon, people to bargaining chips – and the fluid southern border of the European continent to the most deadly migration route in the world.[2]

Lives that are lost
Whether viewed from a historical, legal or conceptual perspective, the European activists at Sea-Watch and other rescue organisations which are opposing this development are not pirates: according to Rediker, piracy in the past was a (class) struggle for survival, which presupposed a sheer defiance of death. But civil sea rescue in the Mediterranean Sea is primarily a fight for solidarity, coming from the privileged position that it is not the rescuers’ own lives on the line. It is thousands of other people – those who are excluded from the European “We” due to the logic of the nation state – whose lives are lost in the Sahara and the Mediterranean Sea, who are left to rot in Libyan detention camps, and whose forced return from the high seas is implemented by the so-called Libyan Coast Guard, which is funded to the tune of millions by the EU.

An act of intellectual piracy
“I do not need to make foreign problems, worries or oppression my own,” explains Pia Klemp, one of the captains of the civil sea rescue fleet, who is facing a court case in Italy for facilitating illegal immigration. “Solidarity means recognizing that all these problems are my very own from the beginning. It doesn’t matter if the effects of it are noticeable in my everyday life or not.” Maybe it’s precisely this idea that rules out the construction of “the Other”, and thus ignorance of their suffering, which constitutes an act of intellectual piracy in the current mentality of the EU.

The political wind changes
Since the MS Sea-Watch set sail in 2015 to epitomise this idea and take action against the fact that people were dying on the external European border, quite a bit has happened: in 2015 and 2016 the organisation was acclaimed by civil society and integrated into the official search and rescue network by the state authorities, but the political wind in the Mediterranean Sea changed direction swiftly. In the first half of 2017, key figures in European politics began to make the claim that the civilian rescuers were somehow colluding with the people smugglers in Libya. Based on “working hypotheses” presented by the Sicilian public prosecutor Carmelo Zuccaro, the Austrian politician Sebastian Kurz, then foreign minister, declared that the “NGO madness” had to be stopped. The German interior minister Thomas de Maizière similarly accepted Zuccaro’s unfounded claims that “the ships travel to Libyan waters and switch on their floodlights close to the beach”. What he didn’t go along with was Zuccaro’s further working hypothesis (and one that was quite possibly more unpopular among politically conservative centrists) that “some aid organisations want to bring migrants to Italy to weaken the economy”.

The humanitarian intervention turned into a resistance movement
Parallel to the effective publicity campaign on land, the state-run military and police operations retreated from the search area off the Libyan coast, as Paolo Cuttitta of Oxford University’s Border Criminologies Blog reports, “in order to leave the Libyan Coast Guard free to push back migrants as well as to chase and intimidate NGO vessels”.[3] Finally, in the summer of 2017 the rescue vessel Iuventa was seized from the NGO Jugend Rettet in Italy, which led to several humanitarian organisations abandoning their work altogether in the Mediterranean Sea. Just under a year later, in June 2018, civil sea rescue seemed to be nearing its end when a coalition of the 5-Star Movement and the Lega came to power in Italy, and the extreme right-wing interior minister Matteo Salvini announced that the country’s ports would be closed. Even Malta, a country ruled by Social Democrats which had long been used by NGOs as a base for operations, subsequently shut its harbour, but went about it the other way around: it prevented the rescue boats Lifeline, Seefuchs and Sea-Watch 3 from leaving the port for months on end.

But the humanitarian intervention turned into a resistance movement: the remaining active organisations – Sea-Watch (Germany), Mediterranea (Italy), Proactiva Open Arms (Spain) and Sea-Eye (Germany) – were deterred neither by stand-offs lasting several weeks [4] nor by their ships being regularly impounded. Even though the civilian rescue fleet was decimated to just a few vessels and left unable to deploy efficiently, it was dubbed the “No Borders Navy” by some activists as it steadfastly continued to “tilt at windmills”: every life in danger at sea has to be rescued and brought to a place of safety on land. “Punto!”, as Matteo Salvini would say.

“In civilisations without boats, dreams dry up”
In his essay “Of Other Spaces”, Michel Foucault describes the ship as “the greatest reserve of the imagination”.[5] Civilian sea rescue has harnessed this abstract potential of ships and positioned it against the deadly bleakness of a Fortress Europe. It has made its boats available not just for people, but also for the notion of an open Europe operating in solidarity – and that has been gratefully accepted. As the political theorists Beppe Caccia and Sandro Mezzadra of the Italian sea rescue organisation Mediterranea comment: ‘Our ship has been appropriated and somehow reinvented from a wide range of standpoints that go from occupied social centres to parishes, universities and schools, from small town circles to metropolitan assemblies.’[6]

The boats, their crews and captains paint a picture that makes other people’s problems our own. At the same time, however, this also turns the solutions into solutions for us. Matteo Salvini’s repeated demand for “confiscation of the pirate ship” merely underlines Foucault’s verdict that, “In civilisations without boats, dreams dry up, espionage takes the place of adventure, and the police take the place of pirates”.

Author info
Chris Grodotzki is a photographer, writer and speaker. He studied photojournalism in Hanover and Aarhus. His journalistic work on environmental conflicts and migration movements was distinguished and exhibited multiple times. He has participated in numerous reportage projects and political art interventions with the Berlin collectives jib and Peng! To the German federal criminal police (BKA) Chris is known “as a member of the German left-wing extremist scene and an environmental activist” and therefore unwelcome in the press corps of global political summits. Instead he supports Sea-Watch and has become an established member of the organisation’s media team over the past few years.

[4] Stand-off: a blockade situation whereby a boat with rescued people on board is prevented by the state from entering the next safe port.

[5] Michel Foucault (1967): Of Other Spaces: Utopias and Heterotopias. Available in English translation at: http://web.mit.edu/allanmc/www/foucault1.pdf. (Retrieved 6 February 2020). 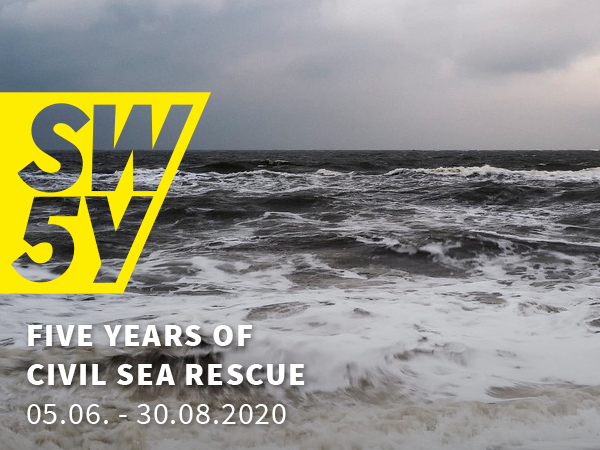 SW5Y - Five years of civil sea rescue
5th June to 30th August 2020
This cooperation between Sea-Watch e.V. and the Weltkulturen Museum presents photographs and drawings depicting impressions, people and moments from the last five years of civilian sea rescue on the most dangerous border in the world – the Mediterranean Sea.